Return of the Little Seamstress


Oh, hello there. It's been ages. I've been very consumed with college, my senior thesis, graduating, moving into a new place, and starting a new job.

I'm here now. I've learned so much about making, sewing, people, and myself in general during my time in art school. I'm still reeling a bit with all the changes in my life, but my craft has kept me as solid as I can be.
Here's a quick sneak peek of my senior thesis pieces. I will go into depth on each of the pieces in following posts. 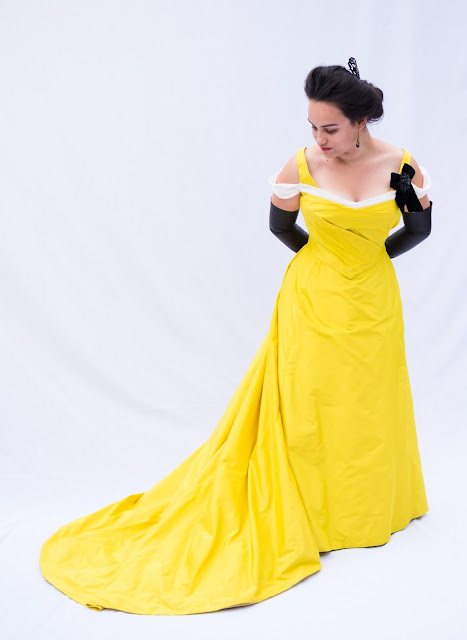 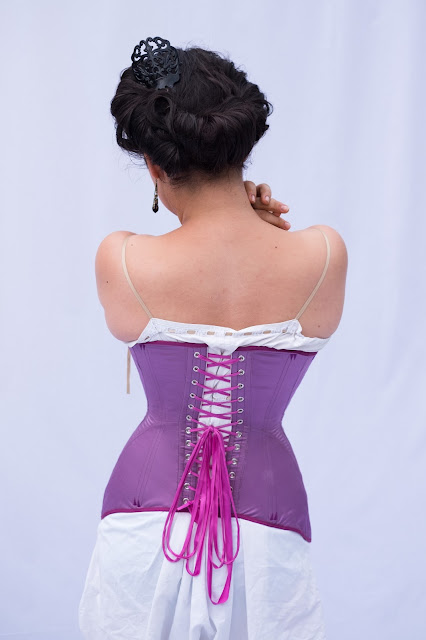 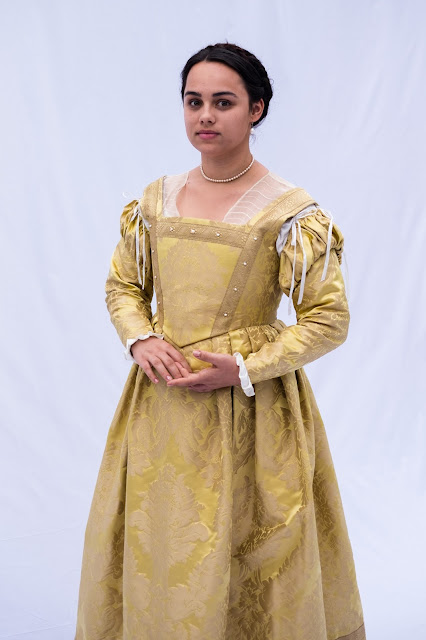 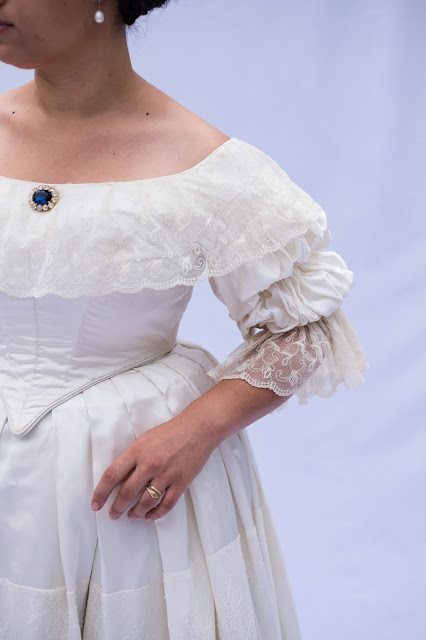 Prepare for a long backstory on this project. If you just want to see the pretty pictures, feel free to skip ahead.
I have been a participant at the The Great Dickens Christmas Fair in San Francisco for about 6 or 7 years now. It is an amazing production put on in the Cow Palace every year on weekends of November and December before Christmas. It's a theatrical recreation of Victorian London, through the lens of Charles Dickens. If you have been to Renaissance Faire, you may have a good idea already. There are several stages with live plays and musicals, ballroom dancing at Fezziwig's Warehouse, meat pies, high tea, "pub" style bars, a children's carousel, Father Christmas, gambling with the "scum" of London, live corset models, fencing, fairy house making, Can-Can dancers, and so much more. There are characters from Dickens' books running around, too. Ebenezer Scrooge, Tiny Tim, Miss Havisham, Oliver Twist, Fagin, and many more.
The characters from A Christmas Carol and Oliver Twist have stages and scenes from the books that they act out chronologically on stages during the day. These are bigger roles and have to be auditioned for.
I have taught dancing at Fezziwig's for the past 6 or so years, which wasn't a role I had to audition for. I heard that the Oliver Twist cast was holding auditions this year, which interested me. I felt I should push myself and try out for one of these more serious roles. I thought that Nancy, a disreputable heroine who ends up trying to save Oliver, would be a fun role.
I was so nervous, but I went to the auditions with a short monologue and did my thing. I was asked to read with the actor playing Bill Sikes. Then I went home. A few days later I got a message from the director that I got the role! I was so excited! I was cast as Nancy!
Nancy is a very interesting and complex character. She grew up on the streets and was given little chance to succeed in life. She became and thief and then prostitute to survive. She made friends with bad people and did many bad things, but, when it came to Oliver Twist, she tried to save him from the life that she had. This leads to her demise. She ends up being murdered by her significant other, Bill Sikes. Her murder is considered one of the most gruesome scenes Dickens ever wrote. Nancy is also considered to be the most complete female character Dickens ever created.
That said, I needed to make my costume for Nancy. I knew I had to carefully consider how to visually represent this complex character. Dickens wrote her as wearing a red dress and green boots, so my colors were already defined. The dress needed to look like it was second or third-hand, did not fit well, and was really shabby. I felt it should also be a little revealing, since Nancy is a prostitute.

I chose to make the bodice in red velvet, while the sleeves and skirt were in red cotton. I had seen this on the character Nancy in some of the Broadway productions of the show Oliver!

I like the look and think it adds more interest to the costume. I made the sleeves straight, 2/3 long, and a little big so they would wrinkle
For my skirt, I made it shorter than most mid-19th c. dresses should be and knife-pleated it into a waistband. The whole dress is almost entirely hand sewn in red linen thread and I used as many period techniques and materials as I could.


I put lots of patches on the dress and distressed it with sandpaper and brown shoe polish. I also coffee-stained the hem of the skirt to make it look really dirty. I don't have any good construction photos after this. I was in a time crunch. I wore it for dress rehearsal and finally got lace on the neckline around the second weekend of the show. Now, enjoy the photos!


We had many rehearsals before the show, which helped me get a grip on my lines and learn how to inhabit my character. I was really nervous about getting it all right. But once the Fair started, everything fell into place and I had an amazing time. There was much time spent laughing, gigging, drinking, running, "gambling", "pick-pocketing", and rolling around in the dirt. 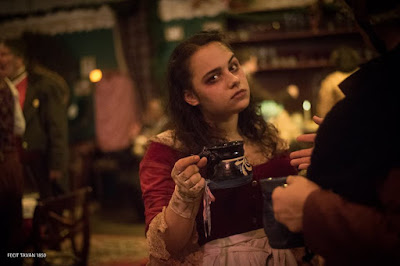 I had such an amazing cast and director. They made it such a wonderful show and experience. We are all a big family now.

I can barely wait for next year!

Posted by Little Mothball at 8:18 PM No comments:

Since this dress will also be my Gala gown for Costume College in a few days, I thought it high time to write up a post on it. This dress was an undertaking. Nearly entirely hand sewn and using as many period techniques and materials as possible. There is obviously a lot I can never get right, seeing as I cannot examine Queen Victoria's actual wedding gown and do not have access to completely period materials and I also lacked $$ for the project in general.

That said, the dress is stitched in linen thread, made of ivory silk satin, lined in natural cotton, hem binding of twill tape, lightly boned with reed, piped with hand-made piping, and fastening with hooks and eyes up the back. The laces were a particular challenge, since Victoria's wedding lace was made specially for her in support of the Honiton lace industry. The bodice lace is 1920's cotton lace and the skirt lace is modern lace that I tea-dyed. The dress is worn over an 1860's corset, bum pad, and quilted petticoat, all made by me.


First, I made the skirt. 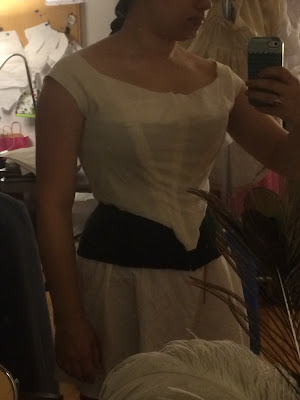 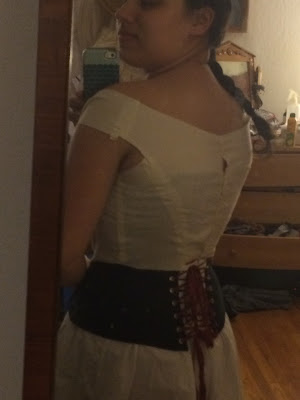 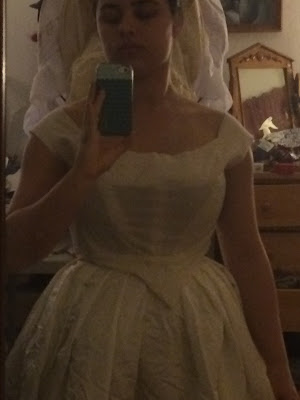 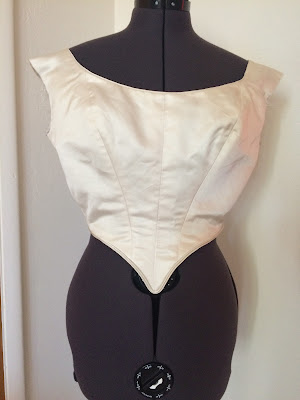 Fitted undersleeve construction and the lace bertha came next. 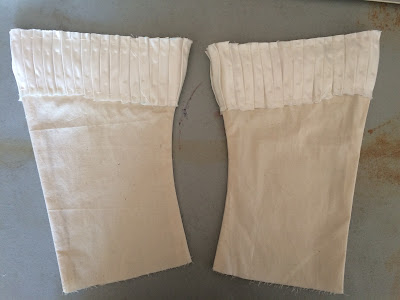 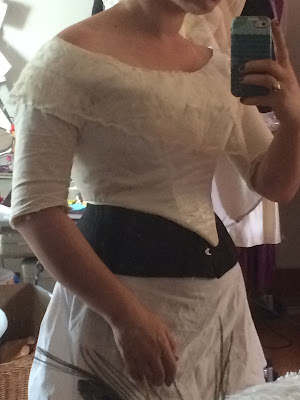 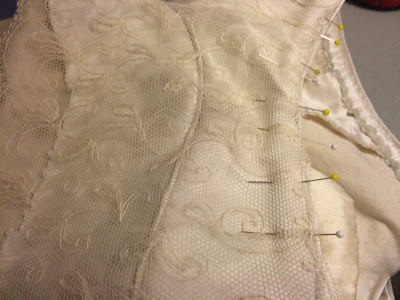 Then came the sleeve puffs. 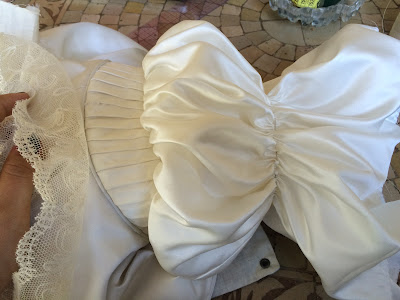 The bodice is looking good. 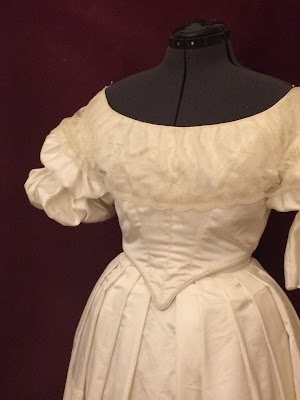 Somewhere in this time, a custom piece from Dames a la Mode arrived in the mail! It is meant to be the brooch that Prince Albert gave Victoria for their wedding, which she wore on that day and often afterwards.
Dames a la Mode did a beautiful job! 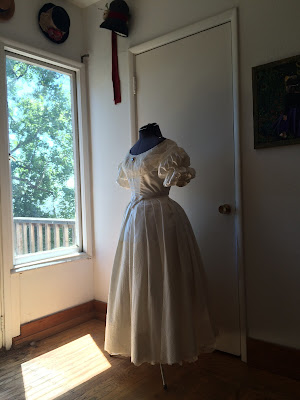 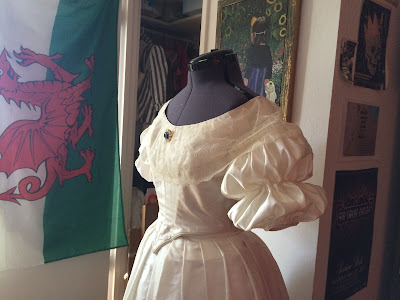 The time surrounding the premiere of my recreation of Queen Victoria's wedding gown was an intense and emotional period. I had two deadlines for this dress: one, to have it done to turn in for a Textiles final project and, two, to have it done to wear as Queen Victoria to the PEERS "The Young Victoria Ball", which was May 9th.
(Check out the PEERS page! They do tons of awesome events in the Bay Area.)


The first week of May was very busy for me. It was my finals week in art college (if you have ever been to college, you will understand how insane that time is), culminating in an equally crazy weekend. I stayed up till about 3 am the whole week, finishing projects. I was a zombie by Friday. I got up bright and painfully early on Saturday morning to go to my little cousin's Bar Mitzvah. After the service, there was a little party. After the party, I ran home and gathered my dress and royal accessories for the ball as well as some of Prince Albert's things. Then I drove to rehearsal and to help set up at the venue. And then, finally, I could breathe.


It was all good from there. Putting the layers of the dress on and doing my hair was an easy routine. My dear friends, Jessica and Laurie, helped me put on the crown and Royal jewels and I helped them get into their lady-in-waiting getups. Laurie and Jessica, the REAL Queen Victorias at Dickens Fair, graciously lent me the Royal Jewels and sash. The necklace I am wearing is a reproduction of Victoria's coronation necklace that Laurie commissioned from Dames a la Mode.
Craig, a wonderful friend and Dickens Fair actor, played Prince Albert. He is a master of transformation! And a super nice person.

Backstage shenanigans with Jessica and Laurie. 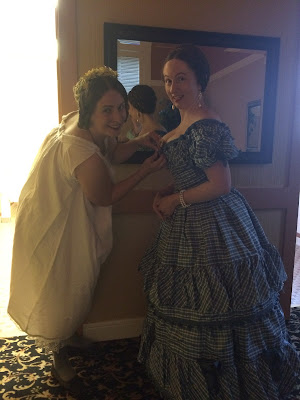 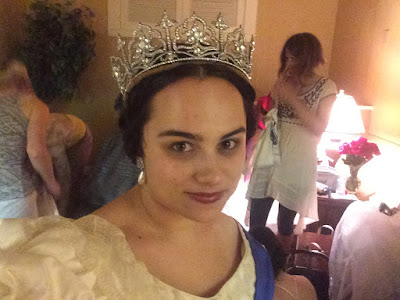 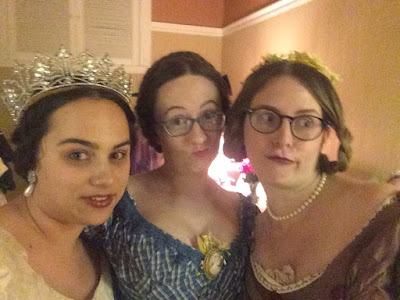 And then came the ball!
All photos by the amazing Tavan Photography. 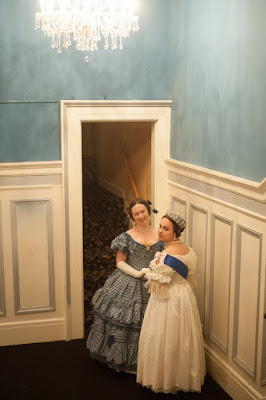 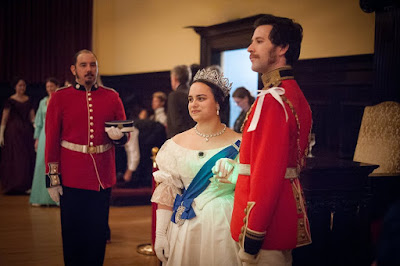 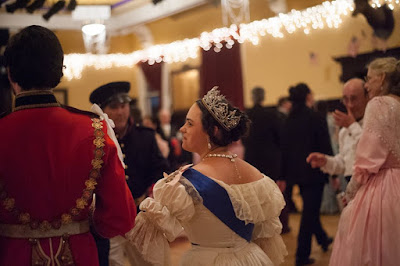 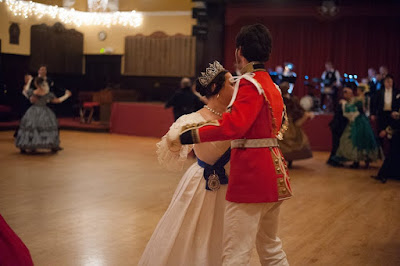 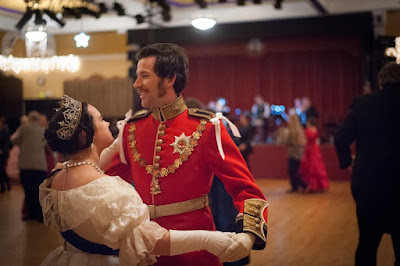 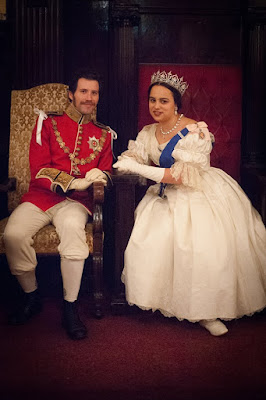 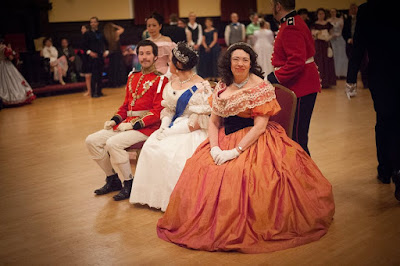 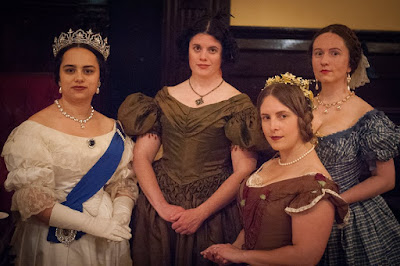 There was lots of dancing, laughing, and good friends.
Thank you PEERS for hosting this wonderful event and allowing me to play out a childhood fantasy.
Thank you Laurie, Jessica, and Craig for your time, support, and willingness to play dressup.
Thank you to everyone else for the dances, conversation, and an awesome evening.

Victoria will be out of the mothballs again in just a few days.

Little Mothball,
Over and out. 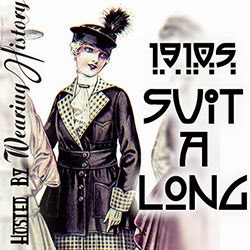